Below is the final report on the Löfling project that I submitted to the Riksbankens Jubileumsfond in March 2015. It is also available in a Swedish version, and it included a list of publications that can be found here.

The overall objective of this project has been to use the life and travels of Swedish botanist Pehr Löfling (1729–1756), who worked in Spain and South America in the 1750s, to explore and analyse the early wave of knowledge globalisation that Linnaean botany represented. The research has focused on three encounters in the “life geography” of Löfling: between him as a young student and Linnaean taxonomy, between him as a Linnaean “apostle” and the world of Spanish science, and between him as a European (colonial) scientist and indigenous American populations.

In essence, this basic premise has not changed as the project has run its course, although over time I have revised parts of the theoretical framework. In the application I used ideas about centre/periphery and the relationship between concepts like local, national and global to organise the contexts in which Löfling moved. While they were never meant to be applied uncritically, in view of recent discussions within the global history of science about the “circulation of knowledge” and “go-betweens” these notions grew increasingly problematic and have been gradually toned down.

This shift aligns well with my own previous work on the global travels of Linnaeus’s students, where I have challenged what I call Linnaeus’s perspective on these journeys and argued that they should be understood in a broader context where there were many stakeholders with different motives. One of the main results of the project has been an example of this in practice as Löfling, during his time in Spain and South America, did not only try to lay the foundations for a future career by cementing his relationship with Linnaeus and other key figures in Sweden, but also actively worked to make himself known to internationally prominent botanists. Meanwhile, in Madrid he did everything he could to build trust and good relations with Spanish scientists and politicians, on whom he depended for the journey to Cumana and Guayana that might be decisive for his prospects as a naturalist.

This memorial to Linnaeus and other prominent botanists stands in Madrid’s Royal Botanical Garden and was erected in 1859. Among the Spanish names on the base of the monument we find ”Loeffling”, Linnaeus’s student Pehr Löfling. It illustrates well Löfling’s delicate position during his years in Madrid, where most leading botanists had not yet accepted the main tenets of Linnaean systematics.

The second major finding concerns Löfling’s role in the process by which Linnaean natural history evolved from a national enterprise – albeit one with global roots, as it were – into an endeavour on a European and eventually global scale, often in the service of colonialism. Based on both primary and secondary sources I have been able to significantly deepen our understanding of the implications of a previously known simple fact: that Löfling was one of the first examples of this development. Before any other Linnaean traveller he took part in an actively ongoing colonisation operation, that of the Spanish empire in Cumana province. In the close examination of this aspect of his life and work, I have also been able to engage the discussion about the go-betweens and their role in the global circulation of knowledge, arguing that depending on circumstances European scientists like Löfling could also clearly assume such a role.

The third and last main conclusion also relates to Löfling’s position as a quintessential middleman, situated as he was at the intersection of multiple traditions, cultures and identities in Madrid as well as New Andalusia. Analysing this position by the use of letters written to various types of recipients – family, friends, Linnaeus and other Swedish benefactors, Spanish botanists and officials – I have been able to show how Löfling’s identity was continually being renegotiated based on changing situation(s) and relations. In him, loyalties based on nationality, ethnicity and religious belief were often deeply connected to and entangled with his strong sense of what it meant to be a Linnaean botanist. Thus, qualities that he associated with ‘other’ (and competing) traditions of natural history he also ascribed, to some extent, to the Spanish as a nation; and in his mind this latter category was, in turn, closely associated with the inherent ‘otherness’ of their predominant religion, Roman Catholicism.

In the course of the project new questions have arisen that point to the broader context of Löfling and his work. Firstly, it would be interesting to relate the study of Löfling in more detail to the other stakeholders in his journey and their varying motives, and to explore what this says about the relationship between science, colonialism and politics during the eighteenth century. Such issues have been touched upon within the project, but could be developed significantly based on both primary sources and an extensive literature in Spanish that is rarely cited in Swedish- or even English-language scholarship. Secondly, the work on Löfling has made me more aware of the little-known history of Spanish-Swedish relations from a colonial perspective. A study of the repeated Swedish efforts throughout much of the eighteenth century to acquire a colony from Spain in the Caribbean or on the South American coast could be a very interesting contribution to the globalisation of Swedish history. 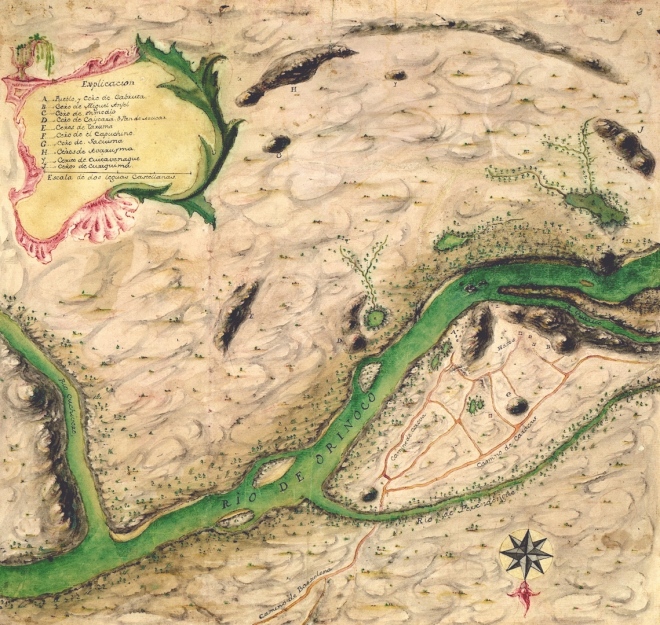 Map of a stretch of the Orinoco River around the town of Cabruta, where the Orinoco expedition (1754–1761) had its headquarters for a few years in the late 1750s. The map is preserved in the ”Fondo Löfling” at the Royal Botanical Garden in Madrid but was probably made after Löfling’s death in 1756. (Archivo del Real Jardín Botánico, CSIC, Madrid, Div. II lám. 200, detail; © RJB-CSIC.)

International collaboration and dissemination of research

The project has been carried out in loose collaboration with Spanish historian Manuel Lucena Giraldo and through a continuous cooperation over several years with researchers and staff at the archives of the Real Jardín Botánico in Madrid. Lucena Giraldo is currently based in Bogota, Colombia, where I visited in autumn 2013 for archival work and research presentations at the Universidad de los Andes and the Pontificia Universidad Javeriana.

Mainly through an ongoing collaboration with Hanna Hodacs, then at the University of Warwick (UK), I have also been able to connect the project to scholarly networks with a more north/west European and Anglo-Saxon emphasis. We have participated in international workshops in Pittsburgh (2012), Stockholm (2012) and Florence (2014), the two latter of which we also co-organised, the first with Karl Grandin at the Center for History of Science at the Royal Swedish Academy of Sciences and the second with Stéphane Van Damme at the European University Institute. Hodacs, Van Damme and I are now co-editing a volume on Linnaean science in a global perspective, which we expect to publish in early 2016.

In addition to the above, from 2011 to 2014 I have attended several conferences and symposia and presented my research at seminars or in public lectures in Sweden, Spain, England, and Colombia. As for broader dissemination of the work and its results I have also written some twenty blog posts about Löfling and the project since its inception. In 2011–12 these were published on a dedicated project blog (https://pehrlofling.wordpress.com), and from 2013 on my personal website (http://kennethnyberg.org), where I have also maintained a calendar of project activities. During spring 2015 I plan to reorganise the now defunct blog into a permanent project archive with various types of documentation and resources.

In order to reach a wider audience in a more traditional way, after the completion of the project I hope to be able to write a short, accessible book in Swedish about Löfling and his world – but that is beyond the scope of this report.

Originally I planned to publish my research in three journal articles, one each for the main spaces of Löfling’s adult life geography: Uppsala, Madrid and Cumana/Guayana. Due to the effects of the theoretical reorientation described earlier as well as opportunities of alternative publication that came up towards the end of the project, however, four of its five main publications will be book chapters and one a journal article. Three of the chapters (including one with Manuel Lucena Giraldo as co-author) will appear in peer reviewed edited volumes from well-regarded international publishers, all scheduled for release in spring 2016.

In addition, from 2011 to the present I have written or contributed to another seven publications that relate to the project but do not deal with Pehr Löfling specifically: one book chapter, one (substantial section of) an introduction to an edited volume, one textbook chapter and four book reviews.

The two most significant publications from the project are the chapter by me and Lucena Giraldo in Hanna Hodacs, Kenneth Nyberg & Stéphane Van Damme (eds.), Empire of Nature: A global history of Linnaean science in the long eighteenth century (forthcoming), and my chapter in Magdalena Naum & Fredrik Ekengren (eds.), Encountering the ’Other’: Ethnic diversity, culture and travel in early modern Sweden (forthcoming); both are expected to be published in early 2016. The former primarily deals with the first two of the main project findings listed earlier, those concerning how Löfling related to various parties involved in his journey in order to further his short and long term goals, while the latter explores the third point about identity negotiation and cultural encounters.

As for open access, the first of the five primary publications mentioned above is now available in full text on my personal website. For the remaining four, currently at various stages of the editorial process, I will request permission to post preprints on the web, and if possible also the final (published) versions. Several of the secondary publications are or will shortly become openly available, and when they are I will link them from my website.